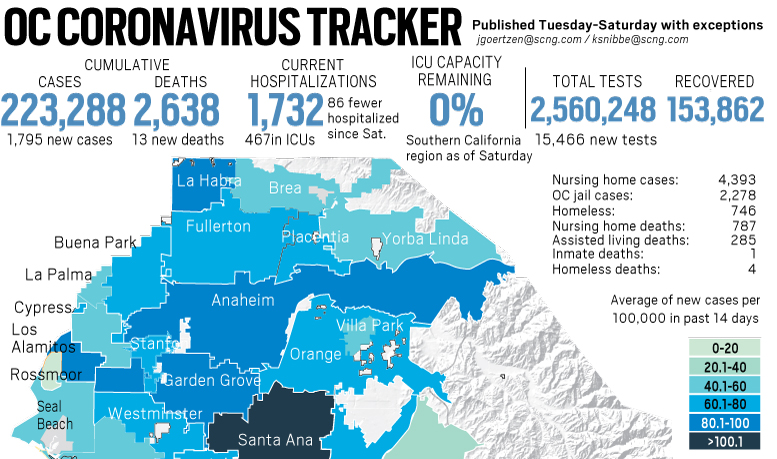 The Orange County Health Care Agency reported 1,795 new cases of coronovirus on Sunday, January 24, an increase in the county’s cumulative total of 223,288 cases since tracking began.

Data on deaths in the county are compiled from death certificates or collected during case investigations and this process can take weeks. The most recent death was recorded on 13 January.

The county reported 1,732 patients at local hospitals, 86 fewer than previous reports. On Sunday, 467 patients are listed in intensive care units.

An estimated 31,427 cases of the virus have been reported in the past 14 days in Orange County.

The county update stated that 2,560,248 trials have been given for coronovirus, since testing began locally, at least 15,466 new trials since the previous report.

Of the cumulative 2,638 deaths reported by the virus, 787 were skilled nursing facility residents, 285 were assisted living facilities, one was an OC prison inmate and four were homeless.

The sequence of deaths by age in the county is as follows:

It is estimated that as of Sunday about 153,862 people have recovered from the virus. The count of those recovered is based on a prior 28-day cumulative case count.

As ICU capacity declines in Southern California, the percentage in this graphic has been adjusted by state public health officials to represent higher levels of COVID-19 patients among all ICU patients. More genuine beds may be available.

Vaccine administered as of 17 January

The California Department of Public Health showed a total of 3,226,775 vaccine doses, including the first and second doses, has been sent to local health departments and health care systems as of January 17.

The totals of the vaccines administered in six different regions are in the maps below. As of January 17, a total of 1,393,224 vaccine doses have been administered statewide. 609,748 from the January 11 report. States warn that the numbers do not represent day-to-day changes as reporting may be delayed.