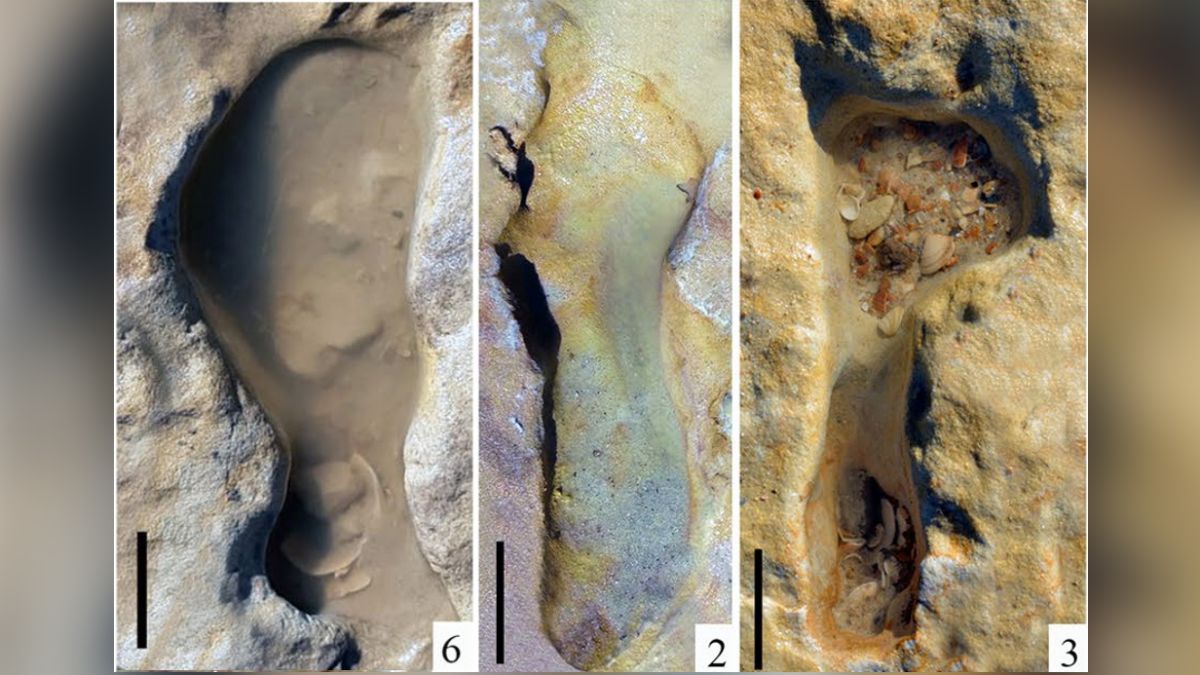 About 100,000 years ago, an extended family of 36 Neanderthals walked along a beach, with children jumping and frolicking in the sand, scientists report after analyzing the fossilized footprints of bathers in what is now southern Spain.

“We found some areas where several small footprints appeared grouped in a chaotic arrangement,” said Eduardo Mayoral, a paleontologist at the University of Huelva and lead author of the study, which was published online March 11 in the journal. Scientific reports.

The tracks “could indicate a passing area for very young individuals, as if they were playing or loitering on the edge of the nearby flooded area,” Mayoral told Live Science in an email.

In June 2020, two biologists discovered the footprints on Matalascañas beach, in the Doñana National Park, after a period of intense storms and high tides.

Biologists first saw the tracks of fossilized animals; Some of the tracks were made long ago by large animals, such as deer or wild boar, Mayoral said.

Only later, after Mayoral’s team analyzed the footprints, did someone realize that some were Neanderthal footprints, he said. “No one recognized the existence of the hominin tracks at the time, which were discovered by my team only two months later, when we began to study the entire surface in detail.”

Mayoral and his colleagues identified 87 Neanderthal tracks in the sedimentary rock of Matalascañas beach. (The researchers determined that those prints were made by 36 people.)

The exposed surface dates to the Upper Pleistocene period, approximately 106,000 years ago, when ancient stone tools discovered nearby show that the region was inhabited by Neanderthals (Homo neanderthalensis). These hunter-gatherers lived in Europe and the Middle East between 400,000 and 40,000 years ago, while early modern humans (Homo sapiens) got there about 80,000 years ago. Researchers believe the footprints could be the oldest Neanderthal footprints ever found in Europe.

At the time the footprints were made, the now exposed surface appears to have been along the edge of a trough slightly inland from the coast, which was further south then than it is today, Mayoral said.

“The water probably would not have been fresh but rather brackish, as we have found evidence of sea salt (halite) crystals on the surface where the footprints are found,” he wrote in the email.

The team photographed the site extensively with an aerial drone and digitally scanned each of the fossilized human footprints in three dimensions.

The sizes and distribution of the tracks suggest that they were made by a group of 36 Neanderthal individuals who were likely related, including 11 children and 25 adults: five women, 14 men, and six individuals of undetermined sex.

“It can be established by correlation with other European sites that there is a direct relationship between the size of a footprint and the age of the person who produced it,” Mayoral said.

Most of the adults walking on the beach would have been between 4 and 5 feet (1.3 to 1.5 meters) tall, but it appears that four footprints were made by an individual who was over 6 feet (1.8 m) high. That’s taller than the expected height of Neanderthals, so the impression may have been made by a shorter individual with a heavy gait, the researchers wrote.

Playing in the sand

Of particular interest are the two smaller footprints, about 6 inches (14 centimeters) long, which are believed to have been made by a boy of about 6 years old. They are found among several tracks clustered chaotically in some areas, possibly because Neanderthal children were playing in the sand at the edge of the waterhole, Mayoral said.

Analysis of the tracks shows that most of the tracks are located at the edge of the flooded area, but the individuals who made the tracks did not move completely in the water, the researchers wrote.

“This could involve a hunting strategy, stalking animals in the water [such as] aquatic birds and waders or small carnivores, ”they wrote.

The tracks could also have been made by people fishing at the waterhole or looking for shellfish; Evidence of similar hunting and gathering behavior by Neanderthals has been reported at other ancient sites.

Stone tools attributed to Neanderthals have turned up at nearby sites, but in those cases, there was no direct evidence, such as Neanderthal bones or teeth, to confirm their presence, Mayoral said.

That made the fossilized footprints especially important, the researchers wrote: “The biological and ethological information of ancient hominid groups when there are no skeletal remains, is provided by the study of their fossil footprints, which show us certain ‘frozen’ moments. of its existence. “

The tracks were “indisputable proof of the existence of these hominids in the south of the Iberian Peninsula and, specifically, in this area of ​​the Andalusian coast,” Mayoral said.