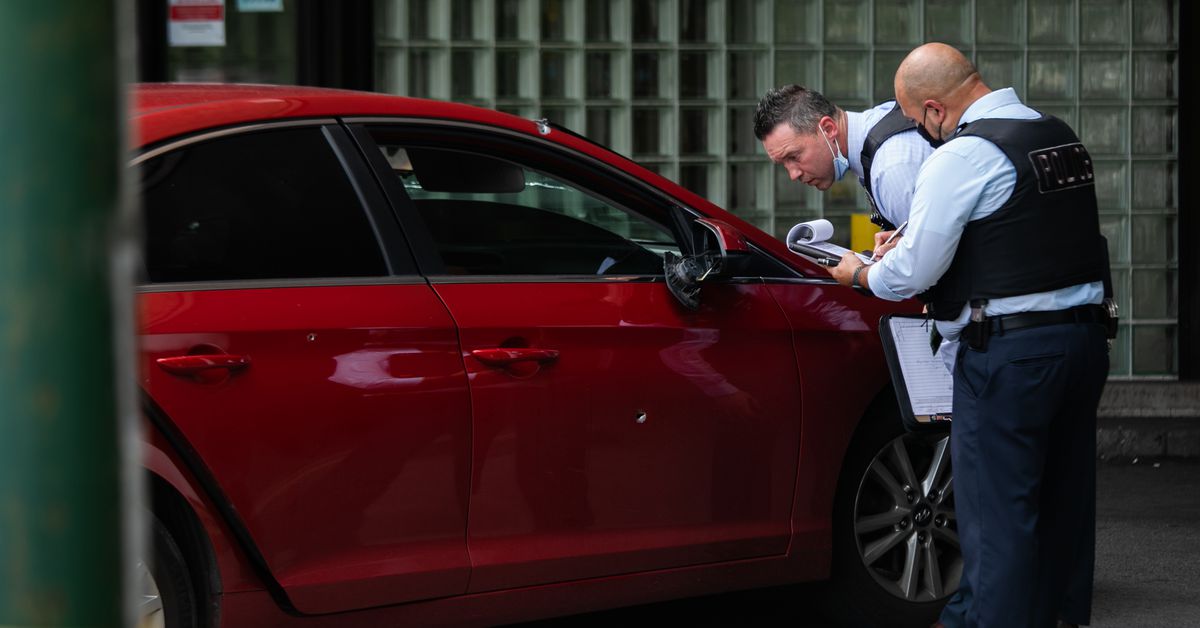 A 1-year-old boy died and his mother was injured in a shooting on Saturday afternoon in Englewood.

The 22-year-old mother and her son were driving home from a laundry room just after 2 p.m. on Halsted Street when another car approached them near 60th Street, police said.

As the cars drove together, someone in the other vehicle fired seven to eight shots at the passenger side of the mother’s car, police said.

The toddler was hit once in the chest while sitting in the back seat of the car, and the mother suffered a head injury, according to police.

The mother drove to nearby St. Bernard Hospital, where the boy was pronounced dead, police said. The boy would have been two years old in a few months.

“This happens all too often,” CPD chief operations officer Fred Waller said at a press conference outside the Englewood District Police Station hours later. When is this going to stop? When are we going to say enough is enough?

Waller said judging by the number of bullet holes in the car, the shooting did not appear to be random.

Waller noted that he made a similar announcement just a week ago when a 3-year-old boy riding in a car with his father in Austin was shot dead when someone opened fire on them from another car behind him.

Waller said he was confident that arrests would be made in both cases.

As she did last Saturday, Mayor Lori Lightfoot expressed her outrage at the shooting, as well as other hours earlier on Saturday when a 17-year-old man was killed in Humboldt Park.

“The pain of losing a child never goes away. Today, we lost more youth to the epidemic of gun violence: a 17-year-old in Humboldt Park and a 1-year-old boy in Englewood. As a mother, I am tired of funerals. I am tired of burying our children, ”Lightfoot said on Twitter.

Lightfoot requested that anyone with information call the police, even anonymously, to bring those responsible to justice.

“It is up to all of us to duplicate our public safety efforts with police officers, street extension teams, trauma support workers, community and religious partners. We must ask ourselves, “What are we doing to make this a season of rewards, not tragedy?” Lightfoot said.

Activist and former mayoral candidate Ja’Mal Green said he was offering a $ 5,000 reward for information leading to the arrest and conviction of the 1-year-old boy’s shooter.

“My youngest son is 1 years old. I couldn’t imagine this happening to my children. I’m hurt. Very, very hurt, ”Green wrote on Twitter to announce the reward.

Standing outside the hospital, Pastor Donovan Price said that everyone in the city should consider the murdered boy as his own son.

“How many moms were in their cars at the laundry on Saturday morning with their children?” he questioned. “Now, a child is dead who did not reach 2.”

Last weekend, 12 minors were among 104 people shot in armed violence across the city that left 15 dead. In addition to the 3-year-old boy, the deaths also included a 13-year-old girl hit by a bullet in Austin and two teenagers shot to death in South Chicago.